Shooting or “Shooter” games are a subgenre of action video game, which often test the player’s spatial awareness, reflexes, and speed in both isolated single player or networked multiplayer environments. Shooter games encompass many themes that generally focus on the actions of a gamer’s “avatar” engaging in combat with weapons against either AIBots (NPC enemies) or other human players. Weapons are firearms or some other long-range ballistic weapon, or could be used in combination with other weapons such as grenades for indirect offense, armor for additional defense. Player accessories, such as telescopic sights to modify the behavior of the weapons, are game enhancements. A common resource found in many shooter games is ammunition, armor or health, or upgrades which augment the player character’s weapons. 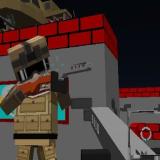